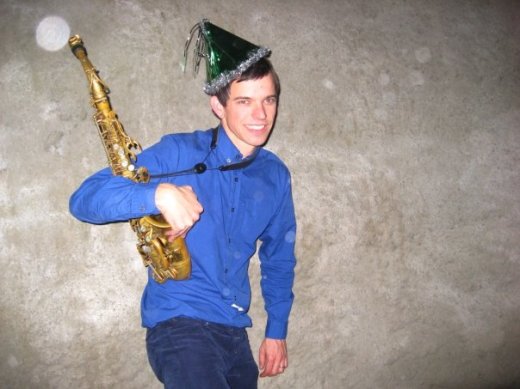 1.  Do you now or have you ever considered yourself a performance artist?
Only recently have I done a project that I considered “performance art.” It’s a project called “Hot Licks” in which I play saxophone over an audio collage of intros, outros and breakdowns of popular songs. The reason I feel like it qualifies as performance art is 1) I couldn’t think of any other way to categorize it and 2) it is a performance that was invented and structured out of my personal creative practice, rather than socially received modes of performance. I am a guy who likes to sit around at home and play along with recordings that i like on my saxophones or flutes — I pretend that I’m part of all sorts of legendary performances and jerk off about it!  Hot Licks attempts to convey that fantasy and that reality.  Other than that I just think of myself as a musician, actor, dancer, personality. I think performances are being enacted by everybody, all the time. i’m actually super reserved in person and very risk averse socially, which might be what draws me to performance art.

2. What was the first performance art you ever encountered in your life?

I turned thirteen years old living in downtown New Haven, CT in 1985. It was the golden age of hip hop culture and I was just outside hip hop’s epicenter in New York City. We were break dancing and popping at school and in the neighborhood. The music, the clothes, the style and the dance moves were all brand new and unformed. We saw signs about a break dance competition being held in a hockey rink across the street from our house, and were working on a routine and were going to enter but didn’t get it together in time. We went to the show anyways…we weren’t blown away by anything there, but the idea of competing against the various dance crews did sort of blow my mind, as I remember it. There were all these kids doing dances to the songs we danced to, we weren’t sure where they came from, but they were not from far away.  I remember wondering how we would size up on stage…my 11 year old brother and me and whoever we had in our crew at that point. Dancing remains my favorite performance act. What beats walking into a night club anonymously and then the right moment and the right song align, and you suddenly are commanding the dance floor and everyone on it who matters?

3. Do you make distinctions between performance art and other forms of performance, like music?

I do make a distinction, although its a bit messy. When someone does something not normally considered performative and calls it performance, it is apparently performance art.  But any willful transcendence of the social norms and codes of performance to achieve honest human communication/artistic expression also seems to qualify as performance.  But funny you mention music, because my ideal of being in a band is very close to my ideal of performance art. The ideal band produces a “sound” that synthesizes the talents, limitations and circumstances of a group of people that have found each other and “banded” together for whatever reason. Similarly, a performance artist invents a new mode of performance out of the circumstances of her lived reality, as well as to achieve some aim or claim some ground.

4. What makes a performance successful, in your opinion?

I am not sure that what makes a performance successful for the performer is always the same as what makes a performance successful for the audience member. So many things can contribute to success. Luck, talent and practice do help.
5. Who is your ideal audience?
I like to imagine that there are people anywhere and everywhere that might appreciate my work. I have tried playing saxophone on street corners. When I did it in New York, in a park on the lower eastside, a guy wanted me to play Body & Soul at a wake for his brother or something, but I didn’t really know Body & Soul that well so I refused, but he wanted to pay me money, and he ended up giving me a ride home to Brooklyn and giving me a long speech about how to live that I really didn’t appreciate. Performing is hard work!  Other times, girls have lifted up their skirts when I’m performing and showed me their underpants, that seemed pretty ideal!
6. Have you found support for the development and presentation of your work?
I have found support, but I have never looked for financial support from my art practice. For any short comings in my creative life, I fault myself first.
7.  Did you have a mentor?
I had a liberal arts education at an elite college, since I was a bit of a nerd in high school and my parents were willing to pay for it. I took several classes with the avant-garde saxophone virtuoso, composer and philosopher Anthony Braxton and his example influenced me a great deal.  But I’m not a great mentee, so I never had a real mentor.

8. What inspires your most recent body of work?
The band LA Fog was originally formed out of the frustration of being the sax player in so many bands, always being a periferal player. I thought there was a lot of interesting stuff happening in the horn section, and that by stripping away all the other parts of the band, I could explore my instrument better that way. Also I like playing rhythm and repetitive parts.

9. How important is your body to your work?

Sometimes my body is an amazing conduit and sometimes it is an awkward impediment to my purposes in performance. My body assures that I will present a spectacle of “me” along with whatever else I do.

10. Have you been encouraged by recent developments in public discourse around performance art?

It seems appropriate that performance art is gaining prominence recently.

11.What does your family think about your work?

My parents support everything I do as if they were hard-wired that way. Or am I hard-wired to please?
12. What is the relationship between performance art and other media?

Performance art should strive for transcendance, it should reach beyond media, like any other great art.